At Hellmann’s, we believe food is too good to be wasted. Our purpose is to help people enjoy good, honest food for the simple pleasure it is, without

Hellmann’s adds a dollop of inspiration to your everyday dishes.

After 100 years, Hellmann's is much more than mayonnaise – we now have five variations on the classic theme of egg yolk, oil and water. And our Hellmann's mayonnaise continues to be the number one mayonnaise brand in the UK.

In 1961 Hellmann's mayonnaise arrived in the UK. Mayonnaise was a relatively new concept in Britain so the early years were spent educating people and promoting the product as a side-of-plate condiment.

By the late 1980s the brand was well-established and advertised as 'the only mayonnaise', claiming over half of the market. In a time of greater health awareness, people also responded well to the introduction of the Light variety with less fat and fewer calories, so much so that an Extra Light, containing 5% fat – was added to the range.

Expanding the range even further, 2012 sees the addition of three new varieties: Hint of Wasabi, Hint of Caramalised Onion and a Hint of Pepper.

So transform a plain sandwich into a delight worthy of a New York Deli, by smearing some Hellmann’s Mayonnaise onto two slices of bread and loading up with your favourite fillings. 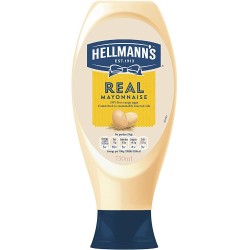