The Don Simón brand was born as a result of a radical innovation and a challenge to tradition: the launch of the first wine packaged in

Brik. A quality wine in a non-returnable, practical, economical and lightweight container with very economical production costs. A total innovation, which revolutionized the market, despite initial rejections from traditional sectors, but which has made Don Simón the best-selling Spanish wine in the world.
the beginning
DON SIMON was born in the early 1980s. At that time, the most widely used container for table wine was the 1-litre returnable bottle, which required having several bottling plants throughout Spain to serve national distribution. However, with the introduction of large stores in Spain, distribution channels and consumer habits began to change.

For this reason, the objective at GARCIA CARRION was to sell wine in a non-returnable container that was practical, economical and lightweight, and that could be packaged in a single plant, and thus obtain lower unit costs, taking advantage of the savings of scale. This is how DON SIMON wine was born.

Innovation
After analyzing several alternatives, such as glass or PET, it was decided to opt for brik technology. José GARCIA CARRION assures that “my father, a very conservative person, had reservations about him when the DON SIMÓN wine was launched, although the real resistance was outside the company. They were very hard times, because we found ourselves alone, facing pressure of all kinds. For many, packaging wine in briks was a challenge to tradition. Despite all the difficulties, we believed in the project, and we were convinced that, by providing a higher quality than what was available at that time in table wines, the consumer would accept it”.

In less than two years, DON SIMON wine became the market leader. In part, thanks to the numerous advertising campaigns on television. “Our idea was to convey to the consumer that DON SIMÓN was the best wine to eat with him every day, and the phrase “I am going to eat with DON SIMÓN” came up.

The brik revolutionized the Spanish table wine market, with the recoverable bottle practically disappearing. However, the real success of DON SIMON wine was its quality and not its packaging. In fact, it still is. The quality that accompanies all DON SIMON products is the key to its success.

brand diversification
In 1986 GARCIA CARRION sold more than 70 million liters of wine. The family business had gone from being a regional company to a national one, changes had been made in the structure of the company, fundamentally sizing the commercial network, but it was very risky to continue in the future with only a product under the DON SIMON brand. In addition, the decline in wine consumption had begun (today it is half that of 30 years ago).

For this reason, the juice was chosen to enter a sector of non-alcoholic beverages. The first strategic approach presented to us was what to call the juice. Calling him DON SIMON had its advantages and disadvantages. Again, the contrary opinions that advised us to put another brand in juice were ignored and we used the DON SIMON brand. “Indeed, at that time the DON SIMÓN brand was closely linked to table wine, but we were convinced that by doing things right, and providing quality, not only could juice be called DON SIMÓN, but another series of drinks ”.

Thus, GARCIA CARRION's strategy was to create an umbrella brand with DON SIMON and bet on it. In 1987, in addition to 100% juices, nectars, must and sangria were launched. All under the DON SIMÓN brand. “Diversification has been one of the pillars on which the growth of our company has been based”.

Present
Currently, DON SIMON is a brand that is in more than half of the homes in Spain and is the most well-known Spanish beverage brand in our country. In addition, it is present in more than 150 countries.

DON SIMON is no longer just wine, but a brand of juices, nectars, gazpacho, sangria, Tinto de Verano, broths, vegetable drinks, creams or veggies and smoothies. In many of these categories, in fact, it is the best-selling brand: DON SIMON sangria is number one, occupying more than 80% of the market.

The quality of DON SIMON products has been the key to becoming what it is today, a quality that is fundamentally based on the monitoring and control of the raw material in the field. For many years, GARCIA CARRION has had long-term agreements with farmers, who are guaranteed the purchase of their production and with whom they are committed to the raw material of our land.

In addition, a Quality Management System has been implemented in all production centers that meets the requirements of the International Standard ISO 9001:2000. All the facilities also have a certificate of conformity with the food regulations BRC – Global Standard Food and in addition, the Almería plant has the European Certification that authorizes the packaging of organic products. 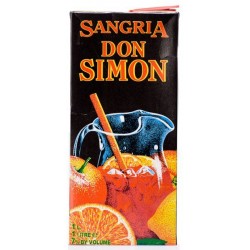