STAR Lager is a Nigerian beer produced by Nigerian Breweries. Star is our nation’s #1 beer; Cold Filtered for that crisp, truly refreshing taste with millions of shining golden bubbles.

In November 1946, UAC in partnership with Heineken established Nigerian Breweries Ltd. In June 1949, STAR lager was introduced into the Nigerian market.STAR gained market ground and in 1960 was the market leader and recognizable at parties and ceremonies.

At its early history STAR lager was promoted as a home made brand with international standards. In 1954, the brand won the bottled beer category at the British Empire and Commonwealth Bottled Beer Competition. In the 1970s,the brand was affiliated with sponsorship of the Nigerian Chess Championship, Table Tennis Competition and a cycling competition. The advertising agency used during the period was LINTAS.

Get Your Shine On 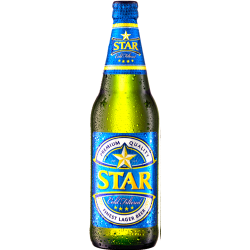