Kiwi is a shoe polish brand, now owned by S. C. Johnson. Originally made by an Australian 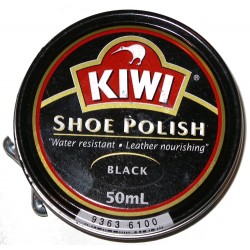