An History of everyday home cooking

Founded in 1872, a Swiss entrepreneur called Julius Maggi had a vision: to make good-tasting and nutritious food accessible to time-poor, working families. Julius Maggi Julius Maggi came with the solution of a protein based vegetable dish, which was quick, easy and inexpensive to prepare. In 1886, Maggi became recognized as a pioneer of industrial food production and healthy cooking by introducing dehydrated soups that were ready to cook.

Maggi is a heritage brand which has been in Africa since the 1950’s and it’s recognized with a trademark of the MAGGI Star. The Maggi Logo is characterized by the red and yellow colors and is available in pressed tablet, powder and liquid formats. CWAR is the largest MAGGI cube producing market in Nestlé and sells over 100million cubes in the Central West Africa Region daily.

MAGGI enables you to provide the goodness of homemade food, which makes you feel essential to the health and happiness of those you prepare meals for every day, including yourself.

Box with image and bottom text

For that, MAGGI has developed a set of products and services designed according to homemade food quality and based on:

Convenient products and services enhancing the pleasure of cooking

Commitment to making our products with care: nutritionally sound and made with familiar ingredients as used at home

In 1883 Julius Maggi had a vision: good-tasting and nutritious food accessible to all. The MAGGI brand has grown to become one of the Nestlé Group’s most popular Brands.

MAGGI is primarily a culinary brand whose heritage is in bouillon, dehydrated soups and liquid seasoning. MAGGI is a source of helpful products and solutions that allows you to be appreciated as a provider of tasty food.

MAGGI in the Central and West Africa Region offers a range of bouillon products, liquid seasonings and cold sauces.

MAGGI Shrimp/Crevette/Crayfish derives its taste from natural shrimp as well as other ingredients like a unique blend of spices and iodized salt. MAGGI Shrimp is available in both cube and tablet formats and can be used for all dishes especially seafood.

MAGGI Chicken Tablet brings a festive taste to your dish. This tablet contains chicken meat, a blend of spices including parsley and iodized salt. Use MAGGI CHICKEN in a variety of dishes including soups, stews and sauces or for boiling rice and vegetables.

MAGGI Onion Epice is great for steaming meat or seasoning meat and fish before grilling, boiling, frying or your preferred method of cooking. MAGGI onion does not only contain onion but other natural spices including aniseed and cloves as well as iodized salt.

MAGGI Cube Regular/Tablette can be used as a base for homemade soups, stews, and sauces/gravies or for boiling rice, vegetables, potatoes, etc.

MAGGI Mutton can be used for all mutton and meat dishes as well as for both soups and stews.

MAGGI Kari Tablet offers more than the ordinary curry does. Made from curry, caramel, spices and iodized salt. It offers you an added value of curry mixed with other spices. It is good for all dishes.

MAGGI Safsafal is made up of onion, garlic, aromatic plants and iodized salt. Food has never tasted better than with MAGGI Safsafal.

MAGGI Nokoss is added after you’ve prepared your ingredients. MAGGI Nokoss will do the rest of the work by enhancing the aroma and taste of your dish in a unique way. Cooking has never been easier. Its ingredients include spices and aromatic plants and iodized salt.

MAGGI Arome can be used during cooking, and as a taste enhancer while eating. It can be when grilling for those special days.

MAGGI Ketchup gives your food a delicious taste and also adds colour to it. 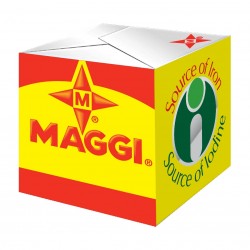